Re-rolling is the action of resetting your game state in order to get a better starting line-up of playable characters. In this game you can do two 10-pulls on the gacha banners and exchange a single 4 star ticket for a guaranteed 4 star unit.

Make sure you have a VPN to a Japanese server and make sure you setup your device depending on how you're planning to re-roll.

Tutorial on using VPN for Android and iOS

Download the game by either going to the JP Google play store or by downloading the APK from QooApp. 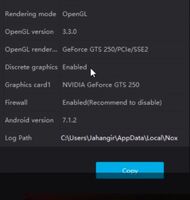 For iOS and rooted Android devices

If you are using iOS, I recommend downloading an Android Emulator on your computer, reroll and then transfer the account. It may be advisable to not do the batch download until after you finished re-rolling.

In order to re-roll: uninstall and reinstall the game.

For rooted Android devices and emulators

Rerolling on a rooted phone is much quicker as it can bypass the repetitive downloads normally required when uninstalling and reinstalling an app. Please note that you will need a Root File Manager (such as Root Browser) installed on your phone or emulator (Nox App Player has one pre-installed). In addition, I will only be describing how to do this process on an Android rooted phone/emulator.

Community content is available under CC-BY-SA unless otherwise noted.
Advertisement